I was chatting online the other day to some friends in the US. We were talking about the elections coming up. My question to my friends was "what are your alternatives for your politicians?" as here, I don't really see that we have a viable alternative.

Channel 7's Sunrise show basically asked the same thing in a poll they did the other day: 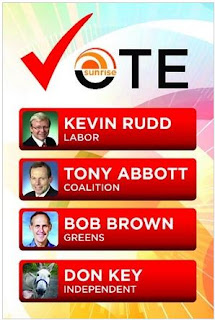 On the radio this morning I heard an extract from this commentary on the poll being read out:

Our leaders fail the test

IN ALL those offices housing all those well-paid advisers plotting the future of all those politicians this must surely ring an alarm bell somewhere: as of yesterday, the most popular potential leader in Australia was a donkey.

With their notorious sense of the absurd, Channel 7's Sunrise program ran the online poll. It asked simply: "Who would you vote for?" and listed Kevin Rudd, Tony Abbott, Bob Brown and Mr Don Key (independent). To avoid confusion the poll carried photographs of the leaders, including a distinguished-looking donkey with handsome ears and a greying muzzle.

But with all the silliness these results have a serious point. They should be enough to provoke one of those infamous Rudd-rants and send Abbott in search of a long hard run.

The Opposition Leader polled 24 per cent, the Prime Minister 20 per cent and Senator Brown from the Greens 12 per cent. The donkey won in a trot, with 44 per cent. And nobody in the real world would be the least surprised.

It seems unlikely that Australia has ever gone into an election campaign with such a poor selection. Kevin Rudd is disliked. Tony Abbott is not trusted. And Bob Brown is seen as inhabiting a planet that most of us have never visited or wanted to visit.

There's a serious crisis of political credibility in Australia, and the donkey is looking good. Political leadership has never been so evasive, nor has it ever been so blatantly dishonest. What's disturbing is that voters may have become so numbed by the spin and lies they've become accepting of mediocrity.

Because of their behaviour, the politicians are gradually losing the respect that once automatically went with the office. Even the incurably polite Laurie Oakes now shows his frustration during interviews as yet another pretender treats him as stupid.

Let's start with Kevin Rudd. The problem is him. It's his personality. He pretends to be things he is not, and is horribly awkward when doing it.

Remember that "fair shake of the sauce bottle"? This week he was trying to sound furious with words like "balderdash" and "bunkum". Do we look that silly?

Then he patronises the voters with a blizzard of evasion through confusion. There was this on climate change: "There has to be a greater synergy between, let's call it our policy leadership in this - which has been focused so much, legitimately on targets - and global architecture almost reverse-engineered back to the means by which you can quickly deliver outcomes."

Or this on the disastrous insulation scheme that may yet cost more lives: "I have no awareness of any document sent to me that said the scheme should be stopped until at the end of the day the advice came to stop it."

At first we thought he was over-educated, a nerd. That's wrong. He's trying so hard to say nothing that he says everything, usually in one sentence and without a comma. People thought they had his measure. Now they feel conned.

Then there are the lies. That's not a word lightly used. Bob Hawke and John Howard were often accused of lying and rarely did.

But the dishonesty of this Government is shameless. OK, it broke a promise to control taxpayer-funded political advertising and will throw away $38 million promoting the destructive mining tax.

That was a broken commitment, not a lie. But it then claimed the campaign was necessary because of the national emergency caused by false advertising by the industry. That was a lie. The dodgy exemption was sought well before any mining industry advertising campaign began.

Now to Tony Abbott. He's the troublesome nephew at a family barbecue. Most of the time he's well behaved but every now and again he goes silly and sets fire to his sister's hair.

He's unreliable, unpredictable and appears out of his depth. He creates unnecessary distractions for himself and every time the Prime Minister starts sinking in the polls, he throws him yet another lifeline.

He seems incapable of picking up what touches people and focusing on that. He has a scatter-gun approach to policy and a hesitant delivery that makes him sound like a struggling sixth grader rather than a Rhodes scholar.

He's not thick but at times gives a good impression of being so, and while his evasive skills are not as refined as his opponent, he's happy to talk endlessly and not say a meaningful word.

He too breaks promises and at the moment is not viewed as trustworthy. He would do better to sell the bike and buy a briefcase.

Finally, there's Senator Bob Brown, who may be taken seriously as people turn green in desperation. He should not be taken seriously. His policies are constructed in fairyland by incompetent elves. They would shut down Australia.

Politicians have always been cynical. Look at John Brumby's decision yesterday to suddenly embrace the case for a corruption commission, something he's resisted for years.

But in this era, nothing sticks. Leaders lie, trick and con, then pop up the next day expecting to be taken seriously.

Perhaps it was ever thus.

Consider these words from two commentators. One, a bloke called George Orwell (he wrote the novel Nineteen Eighty-Four) and the other a TV dork called David Koch.

In 1946 Orwell said political discourse was "designed to make lies sound truthful and to give an appearance of solidarity to pure wind".

In 2010 Koch said: "The donkey is a quirky way of focusing on the fact that all politicians have to pick up their game. They've forgotten we want honesty, vision and action on things important to us and not just them."

The unlikely but frightening prospect underlying all this is that if the two mainstream leaders continue to fail the country, Bob Brown could find himself invited to form a coalition government such as the UK model.

Suddenly New Zealand would become an attractive place to live.

Neil Mitchell broadcasts from 8.30am weekdays on 3AW. nmitchell@3aw.com.au

Unfortunately, I really agree with what he says :(
Posted by Julie at 9:57 AM

Ouch... I was told Rudd was going to be a BIG mistake, looks like that turned out to be true, but your options are as limited as ours... Hell, at this point, I'd vote for the donkey if it ran, at least it wouldn't lie!!!

I think there will be a lot of Donkey Votes in this next election .. sad really

The biggest problem is the word you used - viable. There are always alternatives to the larger party's candidates, and some are quite capable people, but so few people are willing to 'waste' their vote, these good people never really have a chance. It's atremendous shame, as the only true way to 'waste' your vote is to cast it for someone in whom you don't really believe. When all people vote their consciences, rather than their pragmatism, all candidates become viable.

L. Neil Smith once proposed adding "None of the Above" to all ballots. If NOTA won, either no one would be elected and the office would stand unoccupied, or a new election would be called and none of the previous candidates would be allowed to run again.

Don't you have any parties that hold to conservative principals---lower taxes, minimal government, maximum liberty?

On Channel Seven's Yahoo Site They are running a poll entitled:

As I would not vote for the Laboral Parties I tried to vote for the Greens but no matter where I clicked it did not register. Some people made comments that they voted for Don Key & most others that they were blocked from voting Green, this serves to highlight the ability to corrupt electronic voting systems like those used in countries like the USA, I note also that this survey was a first past the post poll. In our "Alternative Vote" Preferential Voting System the two "Mules" who in this instance happen to be at the top of the top of the ticket will harvest all the preferences to allow one of them to stay in power.

David Koch, yet again you have made an "ass" out of yourself

Tea Party anyone? Your choices seem about as bad as ours were last go-around. Now people here are more determined to vote-out ALL the lying bastards.