PROSPECTIVE gun owners would have to pass a mental health test before being granted a firearms licence under recommendations submitted by a NSW coroner.

After inquiring into the self-inflicted shooting death of a man during a confrontation with police in Sydney, Deputy State Coroner Paul MacMahon found the licensed gun owner had posed a "very great danger" to many unsuspecting people.

The 22-year-old man, who cannot be identified for legal reasons, drew a Glock pistol when two police officers asked him to stop near Eastwood Mall in Sydney's northwest on March 10, 2008.

The officers exchanged fire with the man before he shot himself in the head, Mr MacMahon said in his findings, handed down today.

An inquest, in November 2009 and March 2010, heard police evidence that the man intended to kill numerous people at random on the day he visited Eastwood Mall.

He was carrying six full magazines of ammunition at the time of his death, with more ammunition and a reloader found in his vehicle.

"He had a veritable war chest," Mr MacMahon said.

On the day of his death, Mr MacMahon found, the man was likely to have been experiencing a "psychotic episode and that he was acting out of a delusion or hallucination".

"What he could or would have done in Eastwood Mall is open to speculation. However, the situation was one of very great danger in which the lives of the many people present were at considerable risk," he said.

Although not clinically diagnosed, the inquest was told the man's parents thought he was experiencing mental health issues, having become "isolated and secretive".

He asked that "applicants undergo a mental health assessment by a general medical practitioner, or other appropriate professional, so as to ensure that they are not suffering from any previously undiagnosed mental health condition that would render the applicant unsuitable for the holding of such a licence".

Furthermore, Mr MacMahon asked, gun licences be shown when collecting firearms from storage facilities and that such facilities keep detailed records of when items are removed and returned and by whom.

On the day of the shooting, Mr MacMahon found, the two police officers acted appropriately.

"The officers' use of their firearm in the circumstances was appropriate," he said.

"The circumstances faced by officers ... (were) life threatening." 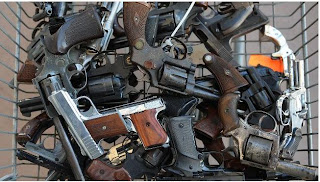 From what I can see, none of these guns (or at least, none of the semi-autos) are legal in Australia

AND spot the issue with this one:

You realize of course, that just showing up for the "assessment" will disqualify you as mentally unstable.
It's the "far left" way.

Well, see, the photos at the end provide the rub. You can test prospective gun owners all you like, but if someone wants to acquire an illegal gun, there will be no test other than the color of their money. It's not the legal guns that are the problem, in the great majority of instances.

It's as Suldog says. No amount of "psychological testing" is going to prevent people intent on getting firearms and using them illegally from doing so.

I think people should have to undergo an IQ test before they can become coroners. MacMahon would likely fail that one.

It's interesting that the article leaves the reader to assume that the deceased was licensed, although there is no mention of that in the article or MacMahon's comments.

Remember gun control isn't about guns, it's about control.

Finger on the trigger?