Got back Friday night from a couple of days "up north".

I've written about the farm that we go to before (here and here).

This time the family came along with "shooting buddy" and me. I drove up with shooting buddy while hubby had the pleasure of the girls' company (he tells me he used ear muffs for most of the drive).

We left Perth on Sunday and arrived late afternoon. We had booked a cabin the (very full) caravan park - they're building roads up there so all accommodation is taken. We ended up being able to only secure a small cabin - four beds (two singles & a double) in one room and a fold out sofa in the lounge. We took the room with the four beds, leaving shooting buddy the sofa.

The girls, shooting buddy and me took a drive out to the farm - leaving hubby to relax - for a look around. We saw some roos and four foxes during the drive. Which was just fantastic.

We got back to the cabin around 9pm had some dinner and hit the hay!

Everyone was up bright and early on the Monday morning so we headed out to the farm for a look around. We spotted an emu but that was about it. We set up targets for the girls to practice with - which is when we discovered that shooting buddy had the wrong bolt for the bolt action .22. He's not going to live this down, of course!

The girls were hitting a small target at 50m with the single shot and lever action .22.

The adults were trying to knock a shotgun shell case off a branch at about 45m. I finally got it with the single shot.

We then headed back for a late breakfast and a bit of R&R (well the adults R&Red but the girls rode their bikes for a couple of hours). About 4pm we headed out to the farm again and this time got some roos.

We saw some foxes again - but I managed to miss them :(

On the way back to the caravan park we bumped into the owner of the farm, who told us that a big flock of goats had been spotted on an adjacent farm and he had secured permission for us to shoot there. Apparently the flock was about 80 goats in size with the majority being billies. He also mentioned that their house in town was empty and that we were welcomed to use it.

Again we got back to the caravan park at 9pm, had some dinner and went to bed.

I have forgotten to mention that the weather was COLD ... VERY cold! The reverse cycle airconditioning in the house didn't :(

Tuesday morning - again up early and back out to the farm and the adjacent farm looking for goats. Unfortunately we couldn't find them. But we did see an emu and chased it across the paddock! It reached the tree line before we did :(

I got a couple more roos but that was about it. We did set up the guns for some more target practice and I had a go of shooting buddy's 30-30. Nice gun but lots of recoil. The girls occupied themselves with the hornet and the .22 lever action. 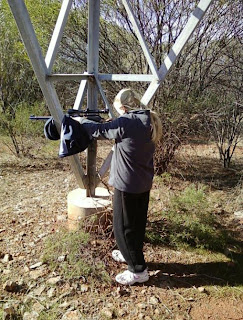 During the day we decided to take a drive to a neighbouring town where shooting buddy had seen a house for sale that he was interested in. The property we looked at wasn't really suitable but we did find a couple of other interesting options.

We managed to catch up with the caravan park managers and discussed moving to the house. They were happy for us to vacate the cabin for various issues so we decided to 'move house' on the Wednesday.

We got back to the farm just after 4pm and went looking for the goats again - nope :( But again got lucky with the roos and spotted a few more foxes - but missed them! Hubby managed to get a rabbit - one of the six we saw during the trip.

Wednesday morning saw us out at the farm again early ... no goats spotted again :( We headed back quite early to organise the move to the house and it was really nice to have a bit more space. The house was walking distance to the local shop and park so the girls were off ...

We managed to round them up again by 4pm for another trip out. Still no goats :( Did see the emu again but he disappeared quite quickly. A couple more roos were shot, foxes were spotted but again I missed :(

Thursday morning was pretty much the same. However after not spotting any goats, shooting buddy asked if the girls would like to ride on the roof rack! Of course they wanted to. We got them up there and they were having a great time as shooting buddy drove slowly over all the bumpy tracks he could find. Suddenly we spotted the emu again, so girls down and back into the 4WD and off. However, the emu had disappeared :(

Shooting buddy then let Miss 8 have a drive. She did very well. Miss 6 had to have a go - she did good as well - however her approach was rather different - she deliberately aimed for all the potholes she could find!

We managed to get her out of the driver's seat, eventually and Miss 8 had another go. We then did a tour of the back boundary of the farm - where I had never been before. We spotted some roo droppings but no animals.

Shooting buddy then took us to a paddock dotted with salt bushes (amongst other trees) and let Miss 6 have another drive. She was instructed to run over the salt bushes but not hit anything else. She had a ball! I don't think shooting buddy's 4WD has ever done such tight turns! She loved aiming for the largest salt bushes she could find. She did, however, miss all the trees that she was supposed to miss.

Miss 8 then had a turn. She took a couple of minutes to warm up to the concept of hitting things and then she had fun too. She managed to miss the trees she should and hit the ones she was allowed to. When we finally extracted her from the driver's seat both were grinning ear to ear. 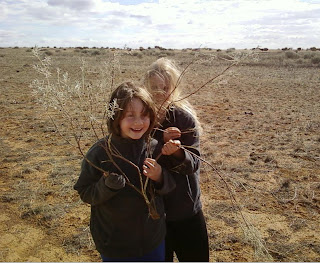 After this we headed back to the house for a stiff drink and the girls were off on their bikes again.

We headed out at 4pm again and within a couple of hours the rain hit! It was so heavy that spot-lighting was not possible. So we headed back to the house for an early night.

It rained all night - with the occasional thunder and lightening. There were puddles everywhere on the Friday morning. We decided to pack up everything and then head out to the farm again to show the girls the difference that rain makes.

The farm soil is basically clay and this is basically the first rain they have had all year so the water just pooled on the surface and there was mud everywhere. We checked out all the wash-aways, river beds and 'places to avoid when wet'. The girls had a great time as we slid and slided our way around the farm. Miss 8 couldn't believe the difference between how things looked the day before. 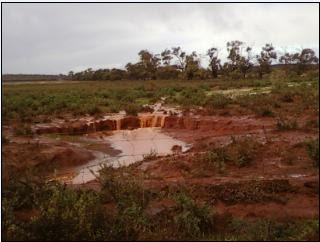 We did see another fox, but it was way too wet to get the guns out!

After a couple of hours of looking around we headed back to the house to do the final packing and head home :(

We carried the girls into the house to avoid mud being tracked in and went back to get stuff out of the van. When I returned to the house I discovered that the girls were sweeping out all of the rooms! I was very impressed! They did good too.

Once everything was packed we headed back to Perth. It rained the whole way back.

All in all it was a fantastic holiday - and the count was 1 rabbit and 13 roos!

I'll get the photos up shortly.
Posted by Julie at 6:08 PM

WOW, sounds like an interesting trip; too bad on the goats. Just as a point of reference, a 30-30 is about the mid-point in recoil between a .22 and the heavier calibers (.308/30.06). Sounds like maybe you weren't 'leading' the foxes enough... I had problems with that for a while when I first started hunting, I was always behind the targets. Interesting comments on the girls driving too! THAT I'd love to see a video of (like y'alls expressions)... :-)

Sounds like you guys had a fun time, I used to love going to the farm with dad, he also taught me to drive at age 8 was the best thing, glad he is teaching your girls, those bumps are lots of fun lol