Regular readers will know that I've been experiementing with "Impossible Pies" and have worked out a recipe for savoury ones that seems to work each time. I've not had the same level of success with sweet ones. The other day I was in the supermarket and spied some blueberries at slightly less than exhorbitant prices so I bought a punnet and went on an internet hunt for an Impossible Pie recipe with fruit.

(Hey who pinched the spellchecker from blogger's toolbar?)

I found this recipe and decided to give it a go.

My version (as I'm totally incapable of actually following a recipe) is below:

Method:
Pre-heat oven to 180C.
Place everything other than fruit in a large bowl, whisk until combined.
Pour into a greased pie dish. Add fruit.
Bake at 180C degrees for 30-40mins until the top is golden and crusty. 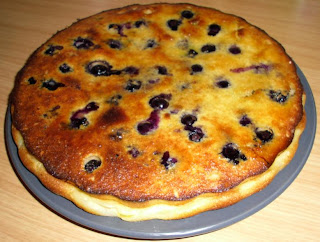 Now I've said "Take 1" in the title, that's because even before I eat it I'm not happy with it. I mean it looks lovely from the top, but doesn't have the 'body' that I'm looking for in a pie. So there will be a Take 2 (at least).

[Update] The girls and I have just had a piece. Miss 10 reckons it tastes like eating eggs. Miss 8 reckons it needs to be cooked longer at a lower temperature.

I actually agree with both of these opinions. It is a bit low on taste - not sure whether more vanilla essence or lemon juice would be the best option. And yes, the top was brown and crusty but it wasn't cooked enough in the middle. So definitely a Take 2 planned.[/Update]

PS This is my first attempt too at a 'scheduled post' so I hope it actually appears!
Posted by Julie at 4:18 PM

It did :-) And I'd add lemon juice! OBTW, what's a punnet??? Pint equivalent or similar?

Thanks for that Jim. A punnet is what we call the little plastic box that fragile fruit - strawberries & blueberries etc - get sold in. Punnets come in different sizes and weights. This punnet, I think, contained about 125gms.