A MAN with an eel lodged in his bottom has shown up at a New Zealand emergency department asking for help.
The unnamed man presented himself at the Auckland City Hospital for treatment last week, the New Zealand Herald reported.

X-rays revealed the eel "about the size of a decent sprig of asparagus," a hospital source told the newspaper.

"The incident is the talk of the place. Doctors and nurses have come across people with strange objects that have got stuck where they shouldn't before, but an eel has to be a first."

The eel was removed and the man went on his way. The hospital confirmed the story to the newspaper, but revealed no further details in order to protect the man's privacy.

It was not clear how the eel had found its way inside the man. According to the newspaper, eels are secretive, nocturnal and prefer habitats with plenty of cover.

I can hear the television on in the lounge and I know Miss 9 is in there:

Me: "Miss 9 are you watching anything useful?"

As some of you might know I'm spending quite a bit of my work-time running roll-out training sessions for Win 7 / Office 2010 at a large corporation here in Perth.  Well some of the staff are in Perth; the others are in regional / remote areas.  I did a site visit a couple of weeks to one of the regional areas and that went well.

However, due to staff numbers at some of the regional / remote areas the company has decided to run some of the training via video link.  I've never done this style of training before.  I like interactive training sessions where I know I'm getting through to people.

Anyway, yesterday was Day 1 of training via video link.  The set-up was that both ends of the video link had 50" screens with cameras.  The left screen had the other party on it, the right screen showed my monitor.  The course presentation was a mixture of PowerPoint, me talking and 'real-time' demonstration. The other trainer (who had used the equipment before) and I got there early to ensure that it was all working.  She resolved a couple of technical challenges for me and then left me with the first group.

The course was scheduled for 1.5hrs and in this group I had 5 to 6 people (some of them went in and out or only watched from the doorway).  But it was a good group - they watched the demo and asked relevant questions.  The one challenging thing though was that I had automatic lights in my room which go out when no movement is detected for 15mins (or something). As I was delivering sitting at a table I wasn't moving around enough so the lights kept on going out (I had to stand and walk a metre to the right for the lights to come back on!).

I had a half-hour break between that session and the next.  I was looking forward to the second session as I had felt the first one went well and now I had a handle on what I was doing!

Not so, I hooked up with the second site, only to find out that their camera wasn't working so I couldn't see them at all.  I could only see myself (with a lag)!  There were supposed to be 6 people in the session but only 3 could make it, so I gave them the option of rescheduling but they didn't want to.  Then I discovered that they weren't just going to listen to me they were going to "play along" on their computers.  Which normally I wouldn't mind, but now I have two people who were going to try what I was showing (the other was just sitting in the corner listening apparently) and I had no feedback other than verbal.  Not ideal.

The course went so-so.  One of the guys was really good at providing the verbal feedback most of the time and there was one thing that I demonstrated that they couldn't get quite right on their machines (this happens often in 'normal' classes, but there I can actually help them, here I couldn't) so in the end we had to leave that thing and move on.

After a lunch break I got set up for the third session.  The system makes the call, I accept it, and get told (from the automated system) that I'm the first participant in the call.  I wait for 5 minutes - still the only one.  So I ring the lady who had organised the video links.  She calls me back and suggests that I hang up and they'll ring me as they're sitting there waiting for me but somehow we're not on the same call.

Eventually we get connected and I can see them and they can see me and the screen and all is well.   I start off with the introductions and discover that they have all have had the "new" system for over a month.  Now this course is designed for people who have just got it, or are just getting it.  Not really for people who have been using it for a while.  Normally, I can make up for this by dealing with any questions longer term users have.  So I then ask what questions they have and get told "none".

So I start to deliver the basic session and as I go ask for questions, comments, anything? Nope, nothing.  They seemed somewhat interested but I had no idea if they were getting anything out of it.  Most groups react excited / positive at the same points in the course - none of these guys reacted at these points and nope, there were no additional questions at the end.  They said they enjoyed it and got something out of it, but I don't know what it was!

Anyway, over-all, doing the video link training was easier than I thought it was going to be - so I'm now looking forward to the next round of presentations.
Posted by Julie at 8:05 AM 2 comments:

Miss 11 (Yes, it was Miss 10's birthday last week - sorry missed the birthday posts) has just finished a 30km hike with three other scouts and two leaders from her troop.

The walk was up in the Yanchep National Park which is a really nice part of the world.  She says that she enjoyed the hike (from Friday evening to mid-day Sunday) and is looking forward to doing more!  I guess that means I need to get my hiking boots out again before it gets too warm. 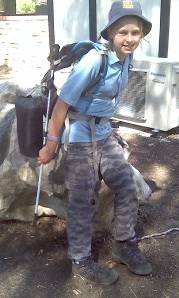 About 7 weeks ago, Miss 10 studied hard and passed the test for her Amateur Foundation Radio Licence - which I blogged about here.

It's her birthday on Monday and we've bought her a 70cm/2m dual band hand-held radio as a present and we were hoping that the licence would come through so that she could transmit for the first time on her birthday.

I emailed the coordinator of the course to see if he knew why we hadn't received the licence yet and apparently all the paperwork for the 13 people who sat the test at the same time has gone astray in the post and they're now trying to work out what to do :(

So unfortunately she'll have to wait a bit longer until she can transmit.
Posted by Julie at 12:43 PM 2 comments:

No, not the music - well some of it is okay, I guess.  Country people, places, scenery, lifestyle - that sort of country!

I've just got back from four days away "country" delivering training.  My first port of call was a place called Northam, about 100km east of where I live.  I was there for three days and had a great time.  The guys in the office and in my training courses were fantastic.  (There was a little hiccup with the computers not arriving in time for the first scheduled course but that was the only downside to the trip).

I then headed further east (about 150kms) to Merredin.  Same thing - although I was only there a day.

The drive was nice - didn't encounter any roos although saw quite a few dead ones on the side of the road - and accommodation although wasn't five star (nor four, three ... ) it was adequate.  One thing that was a bit sad is how dry the country-side is looking.  There were a few fields of canola which looked pretty nice, but a couple of fields of wheat weren't doing too well.

I'm heading north next weekend - so it will be interesting to see if it's any greener up there.

PS If you're looking for a good burger when you're out that way, the roadhouse at Meckering is the place to stop!
Posted by Julie at 9:37 AM 5 comments: