Yesterday Miss 11 went abseiling!  She tried it at Jamboree earlier this year but it didn't go so well so I suggested that she goes on a proper course and gives it another try.

She was a bit nervous but agreed and we signed up with Adventure Out for a 1/2 day (well 7am to 2pm) course for yesterday.

The course was run out at Boya Quarry and it was a perfect day weather-wise for it.  It was initially quite cold at the quarry but then warmed up nicely when the sun finally hit.  There were 9 other people on the course and two (fantastic) instructors.

Miss 11 was still a bit nervous but put it behind her (and with the support of her "partner") did the first cliff face (about 20m?) three times.

They had also set up a climbing area and she went about 15m up the climb before deciding that that was far enough.

Then she did the second cliff - which was an overhang - once.  After some lunch they all attempted the "BIG" one - 58 metres. 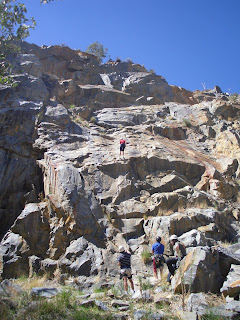 She did enjoy it, but only wanted to do it once.

However, she does want to go back and do the climbing course they run and also do the abseiling one again!
Posted by Julie at 10:14 AM 5 comments:

Should there be sensible 'gun control'

Following a discussion on this topic - over at Mr Cranky's (initial discussion here) then via email. Mr Cranky left this comment on my last post and I thought it would be good to pull it out and put it in it's own post for (polite & respectful) discussion:

Julie, I lost your email address, I think I owe you some answers re gun control in the US.According to my friend a semi-expert I could buy an AK47 today in less than an hour (except currently there has been a run on them and the supply is very low). A pistol might take me 2 weeks.My expert once worked at a sports store that sold guns. One day a person came in wanting to buy a gun. He was very upset and clearly looking for revenge on someone who had beat him up. My friend could not talk him out of buyung a gun and could not turn him down legally. He informed me that he was able to sell him a gun with the wrong ammunition and thinks he saved someones life by doing so.

Personally, living in a country with very strict "gun control" and seeing that it really doesn't make a shred of difference - there are shootings here weekly across the country - I do not see the benefit of it.  Other than it makes it harder for those who choose to follow the law.

Miss 9 and Miss 11 are watching Gilligan's Island - the apeman episode.  On the show the tape recorder he used was described as ... 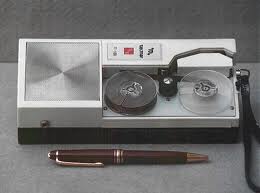 Finding a high school for Miss 11

I know I’ve been neglecting my blog over the last couple of months.  This is mainly due to “life” – and in particular most of my spare time has been taken up with a hunt for a suitable high school for Miss 11.

She is currently in year 6.  Our schools in this state are structured as year 1 – 7 is primary school (yes there is pre-school / kindergarten before that) and then year 8 – 12 is high school.

From 2015, year 7 will change to being “high school”.  Well actually it will be mandatory for year 7 to be part of high school from 2015, many of the private schools have already made the change and are now structured as year 7 – 9 being middle school and 10 – 12 being upper school.

But state (public) schools aren’t doing this yet.  They won’t have be taking year 7 children into the high schools until 2015.

We could do the same for Miss 11.  HOWEVER, in our public high school system there are a number of specialist programs that sound interesting.

The first is the “Gifted and Talented Program” (referred to as “GATE”).  There is a possibility that she could get into this and undertake the program at one of the local high schools.  We visited the school last week and she really like it and the Principal.  It’s a BIG school – current school population of 1500 but it didn’t feel crowded.  In fact, we were wondering where all the kids were (the Principal said he thought that they were all playing truant!).

Entrance to the GATE program is via a series of tests held on one day (May), with offers for places in August / September.  Last year there were 850 places across the state with 2400 children sitting the exam.

As this program is relatively difficult to get into, and comes down the child’s performance on the day we have also looked at alternatives.  The other programs offered by the public school system are known as “Specialist Programs”

There are three that interest Miss 11:


All of these programs are offered to the students in the school district first (we aren’t in any of these districts) and then if there are places available out of area students can apply.

For Lesmurdie the exam will be held around September, for the other two schools applications will be processed in March next year.

And this is where the difficultly lays.

If she doesn’t get into any of these four programs (GATE & the Specialist ones) then we will not know this until mid-next year, by which time all of the private schools (we would not consider sending her to a public school outside of these programs) would have commenced their “middle school” structure.

Now we have found one private school – that Miss 11 liked a lot - that was happy to take her in year 8 if she wanted to stay at her current school until then, IF there are places available once the year 7 intake has been finalised.

So basically now it’s “wait and see”.  She’s sitting a trial exam next Saturday to give her an idea of what the GATE exam (and those for the Specialist Programs) would be like.  But realistically we may not know the outcome until mid-next year.

The other issue we face is that she might be the only year 7 in her current school next year.  Currently there are 13 children in year 6 and only 5 in year 7 (they’re all in a combined year 6/7 class).  I am not sure how well this structure will work (and even if it’s possible) if she is the only year 7 (the current year 5s are in a mixed 4/5 class).