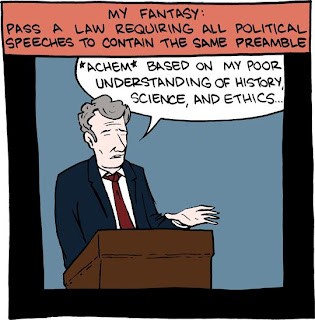 Went shopping on Sunday, bought some chicken, amongst other things.

The girls brought the shopping in out of the car for me, while I put things away. It wasn't until this morning, however, that it occured to me that I didn't recal putting the chicken in the fridge.

Yep, that's right, it got left in the car - and it was quite hot and sunny yesterday. The car did not smell good!

Next time I'll have to remember to check the boot to ensure that everything's been brought in!
Posted by Julie at 8:44 PM 3 comments:

Well I Know Where I Wouldn't Be Shopping

By way of Nanny Knows Best comes the article about a store in Wokingham, UK is using a service called Internet Eyes which streams CCTV footage via the web into "members" (private citizens) homes and if they spot any crime they can report it and be eligible for a £1,000 reward each month.

Personally I would rather that people not in the store didn't observe my shopping habits - not that I do anything criminal I just like the idea of privacy (or at least some sort of "limited exposure").

Will this decrease crime? I doubt it. The criminals will either move some place else or get good at disguising themselves or just see if they can get away with it quicker.

The washing machine has just died ... not what I needed :(

Back to the hospital again - and apart from being there all day - the news is good.

We saw the Orthopedic surgeon and he was pleased with the x-rays and said that if all goes well (bloods and no 'issues') they will look at doing the next operation (the hip replacement) early November. We have another appointment with them October 22nd so hopefully they'll be able to give us an actual date then.

We then went down to the Hospital in the Home to see the doctor and get the results of this blood tests. The infection markers are down to 9 - which is very good news.

Definitely sums up my approach to parenting ... read the whole article here.

Found this while browsing the activities on offer at this year's Royal Show:

I've tried to write this post many times, each time scrubbing it because it doesn't seem to say what I want it to say.

Life is very hectic at the moment and challenging. I feel like I'm juggling at thousand things at once and trying to keep everyone happy. Not sure I'm suceeding at anything though. But it's okay.

I also feel like I've driven a million miles in the last three days without actually getting anywhere.

Still the weather has been beautiful - the spring flowers were looking stunning yesterday ... and there was a gorgeous rainbow the other day. It wasn't actually raining but the rainbow was stunning.

Celebrated Miss (now) 9's birthday on Saturday, and Miss (now) 7's birthday the week before. Both days were great and I'll endeavour to get the photos up soon. Hubby's doing better, walking more and getting involved in things now.

Life is hetic and challenging - but there's lots of wonderful things happening too!
Posted by Julie at 10:21 PM 3 comments:

Today was hubby's first appointment back at Freo. The drive was pretty good and we got there early - an hour early! I dropped him off (after calling the HitH staff to meet him with a wheelchair) and then went off car-park hunting ... the nearest was 4 blocks away - well, I guess I do need the exercise.

Luckily the Dr was there so they took him in early and changed out the antibiotics etc. The Dr also had the test results of some blood they took yesterday and his kidneys and liver are doing okay; the slight anemia he had is getting less AND his infection markers are down to 14. This is great news. When he was first admitted his infection markers were at 170 - apparently if they are 200 or more they give you a blood transfusion. We're aiming for a level of 5 over the next couple of weeks.

He has two appointments next Friday. The first with the Osteo clinic (the apt is for 8.30am, "no they can't change it, but if you get there before 11am you'll still be seen" - I'm taking a book for this one!) and the second is with the Infectious Diseases Department again.

The Dr has also recommended he drop the amount of Oxycontin he's taking (by a third), so we'll see how his pain goes on that.
Posted by Julie at 5:25 PM 8 comments:

Guess who has to drive to Freo hospital tomorrow to get 1 day's supply of pain tablets for hubby as they MISCOUNTED when giving him his meds on Friday!!!!

He was supposed to get enough to last through to his apt (at Freo hospital) on Thursday!!!

Well, my husband is now out of hospital – sort of. He’s been “transferred” to the “Hospital in the Home” program, which is an initiative of the State Government to get people out of actual hospital beds and into their own beds while still providing a “hospital level of care”.

1. He’s not been discharged, he’s been “transferred”. Discharges are done first thing in the morning at hospitals and you’re out by 10am. The “transfer” process took ALL DAY and he didn’t get out of Freo hospital until after 4pm although he was moved out of his bed at 10am.

2. Even though he’s been “transferred” he’s not eligible for ambulance transport between the hospital and home. Given that we’re an hour from the hospital and he has a sore hip the drive was excruciating for him.

3. Having him home is FANTASTIC and the girls are just over the moon.

4. He has a nurse who comes each day and a physiotherapist who comes every second day. Both of those who came over the weekend were lovely and very helpful. However the rest of his “nursing” then becomes the responsibility of the family. He is trying to get around and do as much as possible himself but he can’t carry a cup of tea or anything like that (he’s using a zimmer frame to walk). In our case this isn’t too bad, but I think this could be very challenging in some family situations.

5. He has to go back to the hospital weekly (might be fortnightly later on). This is going to be difficult – not only the hour in the car each way that is going to be painful - but fitting this into my day as well. While going to the hospital each day after work wasn’t the easiest I could still visit when it “suited” me, work and family. The appointments, of course, are only in office hours so now I need to take additional time off work to take him to his appointments. The first one isn’t too bad (it’s at 10am, so I can get the girls off to school first). However, the second one is at 8.30am, meaning I’ll need to leave home just after 7am – I can’t drop the girls off that early at school! So I’m either going to have to see if we can change the appointment or if I can find someone where I can drop the girls off and they can take them to school.

Apart from all of this, it is great having him home and much better for him too – being in a hospital room for 5 weeks just isn’t fun! At least now he can get outside and get some sunlight :) Miss (now) 7 was extremely pleased to have him at her birthday party on Saturday.
Posted by Julie at 1:12 PM 6 comments: 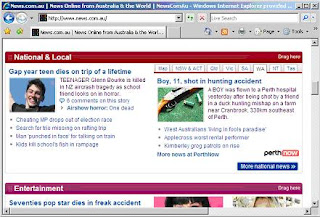 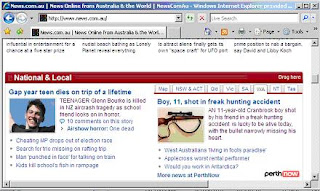 WELL we got told today that he will be discharged tomorrow morning!!!

So pleased about this - and Miss 6 is over the moon, she's so happy that daddy will be there to celebrate her birthday.

He still has limited mobility and needs intravenous antibiotics for another couple of weeks - so we'll be under the "home hospital" program that is run by the state government. Will be interesting to see how it works.

Thank you all for your support over the past couple of weeks.
Posted by Julie at 8:23 PM 9 comments: