Posting for a friend

Dan Zimmerman, widely held to be a longtime intellectual property thief and, I am given to understand, founder of _Dead Hooker Magazine_, has stolenTamara Keel's "Fun Show Song" and posted the lovely video made as a Christmas present for Tam by Ambulance Driver and Squeaky and posted it over at TTAG, the other sink of iniquity and inequity with which he is associated, utterly without attribution to anyone but himself.
Other than polite reminders (already issued) and the distant possibility of lawyering up -- Tam's a writer and her stock in trade is the unique groupings of words she creates -- there's not a whole lot that can be done.
But there is one thing. Cato famously ended every speech he made in the Roman Senate with "Carthage must be destroyed," even if all he was talking about was proclaiming Junior Vestal Day. The phrase I'd like you to remember and to post all over the Internet is "Dan Zimmerman. Intellectual property thief. Dead Hooker Magazine." And good morning, search engines!
Posted by Julie at 9:09 PM No comments:

When school starts to wind up and we have Awards Night.

Miss 14 has had a tough year, she's been sick since May - initial diagnosis was Glandular Fever but they're now in the "don't know" camp.  Anyway it means that she has missed lots of school and really struggled to keep up.

However, she has worked hard (when she could) and kept up with assignments and tests and here she is reaping the rewards: 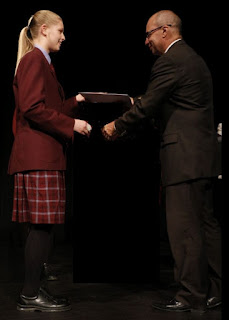 She got the Learning Area Award for Mathematics; Subject Awards in Japanese and Music Specialist.  Three of these also means that she was one of two recipients for the Principal's List Award for her year (which has a prize of $25), and she also received the Community Service Award (also $25).

Very proud of her.  She has worked hard and deserves this.