Fun on the Range

Went to the range yesterday to do an "Introduction to Firearms" show and tell session with a group of people. Unfortunately a whole bunch of them dropped out at the last minute and it ended up being a group of two. One was the girl who came to the range on Nov 29th and the other was a girl from work, who was extremely nervous about the whole thing.

My friend (Steve) who has been a member up at the range for about 20 years brought some of his arsenal along (Mauser, Lee Enfield, Mosin Nagant, Pump Action Shotgun, Single Barrel Shotgun, Double Barrel Shotgun, his .38 standard gun and his .38 race gun). I had my .22 ruger 22/45, my 9mm Springfield and a .22 Winchester Lever Action rifle. Another club member (Bill) was up there with his revolver and he joined in on the fun.

During the course of the next couple of hours we all shot pretty much all of the guns. The girl from work took a bit of persuading when it came to each gun, but she did like the .22 Winchester Lever Action.

Both of the visitors have decided that they would like to sign up for the IPSC training course next year.

Here's a couple of photos: 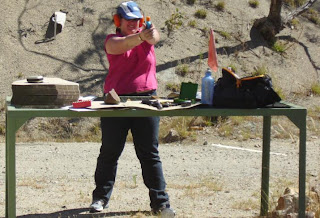 Michelle with the pump action shotgun 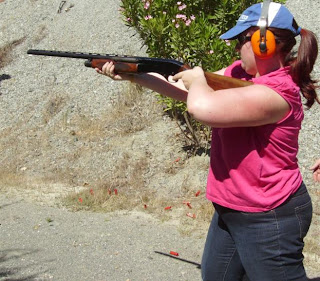 Two is better than none, plus ANY day at the range is a good day!