Busy weekend gun wise … I worked with the Training Officer and the trainees again on Saturday. This time there were only 7 of them, one of whom was a complete newbie. Actually she's one of the girls I mentioned in this post as being "extremely nervous about the whole thing".

She said that she really enjoyed it and is looking forward to next Saturday, so that's a good thing.

The training course went well and I don't even think I had to remind anyone (more than once) to keep their finger off the trigger.

On Sunday I shot in our monthly trophy shoot. My gun has had some work done on it since the last time I shot including a mag well (makes reloading much easier) and the trigger has been lightened. I was pretty nervous through the first two stages (it was a 5 stage shoot) as I hadn't shot for awhile and the gun felt quite different. After the second stage we had a long wait for the next range to be free so I went to an unused range and shot off two mags worth. After that I was much more confident with the gun.

My shooting was okay – accuracy was down a bit, but I was making a determined effort to try and shoot the second shot faster, so times were a bit better. I can really tell that I need more practice, so I think I'll have to shoot off a couple of mags after the training course on Saturdays just for that additional practice time.

The stages that were set up were challenging and fun to shoot. One stage had two swingers which you activated from a window by shooting a popper and then you had to go to another window to shoot the swinging target. I was pleased to get two shots on each of these two targets.

Another stage had four disappearing targets on it. Three were activated by the use of a foot plate. The first target took a bit of time to come up, then fell, raising the second target, which fell raising the third one. All of these targets were partially covered with no-shoots. Target one was slow, but two and three were very fast (in my opinion anyway). Again I was pleased to land two shots on each and avoid the no-shoot zone!

I did however get "chatted" for gun direction – on two ranges my reloads had the gun heading for the 90! Really need to practice these especially when moving right to left.

The shoot took over 2 hours to complete. We start at 9am and I didn't get off the range until after 11.40! I had arranged to meet some people at a nearby park for lunch and then some of them were going to come shooting too.

The lunch was nice, but less people than expected actually showed so when it came to shooting we just had a family of 4.

I took them back up the range (along with someone who was just going to have a quick look see – and "there's no way I'm touching a gun" – she ended up pulling the trigger on my .22 Ruger - and enjoying it ).

With the family, my friend Steve did the show & tell bit and then we went out on the range. The boys shot a short stock .22 rifle first, mum and dad then tried my lever action Winchester .22 rifle. We moved onto the .22 Ruger (all four shot this), then my 9mm Springfield (the boys got one bullet each on this one). After this they shot another friend's revolver, Steve's Edge and Open Gun and then the over / under shotgun and the pump action shotty. I also got a turn with the pump action (yippee). We wound the day up with the boys shooting off another mag each on the short stock .22.

Here's a collage of photos from the day: 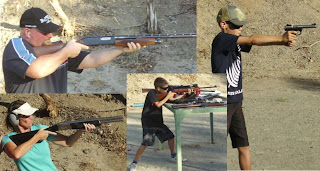 Everyone seemed to enjoy themselves and mum and dad are planning to come back up the range on a competition day (without the boys).
Posted by Julie at 3:35 PM

Well done Julie! And yes, MORE trigger time! Remember, even shooting a .22 pistol will help with the 9mm. It's all about front sight and press... :-)

i really do wish it was that simple Jim ... i'm now toying with the idea of entering the "Nationals" next year .... mmm .... lots of work but could be a good challenge.

It is... after a few million rounds :-) Go for it! Regardless it will be fun, you will learn a ton, and make a BUNCH of new friends!