Fun at the Range and a Newbie

I'm currently in Adelaide staying with a friend and we decided to go and visit an IPSC club today.

I had, at one stage, thought about bringing my gun across but there was a hold-up with my IPSC membership so in the end it didn't happen. However, during that process I had been in contact with the Southern Vales Practical Shooting League and decided to take them up on their invitation to visit.

We arrived just before noon and found our way to the club house. After standing around looking lost for a bit I found someone to introduce myself too and a lovely lady, Jean, took us under her wing. We (my friend, her husband and I) were shown the way to the ranges.

They were still setting up ranges when we got there. So we walked around, chatted to various people and had a look over the stages. I was quite amazed at how shallow their ranges were. They also seemed narrower than what I am used to. Lots of the ranges had fixed structures, two of which were used for the shoot today.

Once the shooting started we hooked up with a group of three and watched them shoot through the stages (and helped with patching and brass retrieval).

Once they had finished shooting the five stages they offered us a shoot. We set up 7 steel targets and I had a turn of the Glock 34 (and hit the targets). My friend Kylie shot next and then her husband.

Here's a photo of Ross with the Glock. 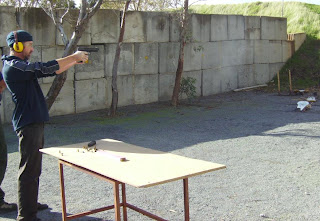 This was Kylie's first time holding/shooting a gun - she did well and had fun.

I was then offered a shoot of a K100. I quite liked shooting this gun, although I did shoot a bit high with it.

We then moved to the rifle range where we played with two 22 rifles. Here's some photos of me with both (btw it had been raining earlier in the day). 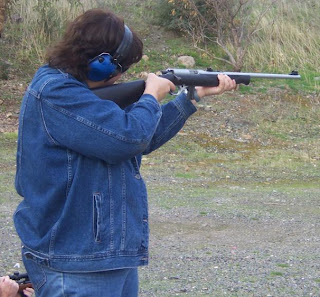 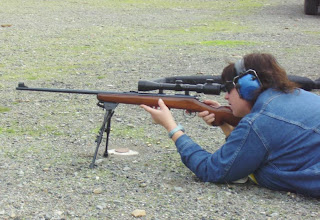 Kylie had a turn with one of these and said that she enjoyed it more than the pistol. 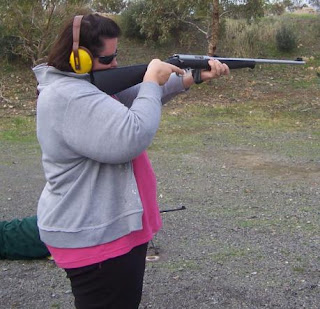 We then spent a couple of hours sitting in the clubhouse chatting to various members.

It was a great day out - but next time I really have to take my gun!
Posted by Julie at 6:05 PM

Thanks Julie - it was an awesome day! :o)