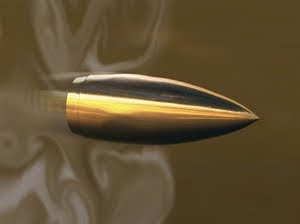 THE State Government has been questioned over its refusal to allow the production of a locally-designed bullet, which has reportedly attracted strong interest from the United States and Commonwealth defence forces.

Midvale-based product design consultants Geng has created what it claims to be an environmentally-friendly ammunition projectile, the Geng Indoor Training Round, that it believes could lead to a multi-million dollar industry for WA.

Midland MLA Michelle Roberts implored the Government this afternoon to meet with Geng to discuss minor amendments to the Western Australian Firearms Regulations that would allow the technology to be manufactured in WA.

Geng chief executive Cliff Green said the projectile was designed for indoor defence training as it was less powerful than traditional ammunition.

He said the company was seeking only minor changes to the legislation to allow the manufacture of the projectile in Western Australia for defence purposes, which could then be sent to New Zealand to be loaded into ammunition.

He predicted such an industry could generate more than $500million each year, while reducing the global demand for lead-based ammunition, which had significant environmental impacts.

“The US and Commonwealth have both expressed strong interest in this and we would like it to be manufactured in WA,” Mr Green said.

“It’s completely safe – we’re not even talking about a loaded projectile and it won’t be available to the general public in any country.

“This is great for Midland – if this goes ahead the design and manufacture of the production equipment will all happen from Elmsfield Road and expand from there.”

He said if the Government did not amend its legislation, Geng would be forced to move the manufacturing to New Zealand.

Ms Roberts called on the Premier and Police Minister to discuss the firearm regulations.

“This local business is leading the way in their industry yet red tape is threatening to keep hundreds of millions of dollars of revenue from Western Australia,” Mrs Roberts said.

“Hundreds of Western Australian jobs will be lost in design, production and transport.

“The Premier must assist Geng to make sure this industry is captured now and not permanently lost overseas.”

On one hand I think that it is a shame that a company with a marketable idea is thinking of going offshore.

However, on the other hand I'm not so sure that I would be happy for this bullet to go ahead. I can imagine three years down the track legislation being passed that only these bullets can be used in ammunition in Western Australia and this will potentially put an end to reloading.

Further thougths: I've been wondering what changes to the legislation they are seeking. There is a company here in Perth which has been producing lead projectiles for many, many years.
Posted by Julie at 8:34 AM