Another "Have A Go Day"

A couple of months ago I did a blog post about the "Have A Go Days" that the Chief Instructor and I run up at the Gun Club pretty much every month.

Today was another one of these. This time one of the guys who came to the last one rang me about 10 days ago to book 18 people in. Although we've not advertised a limit to the number of people we were hoping to keep it to 20 or less. So we had our fingers crossed that no more people would "just turn up on the day" without booking.

One of the things we learnt last time was that with lots of people you need to be very organised to keep things moving as although we love doing it we really don't want to be there for HOURS!

So during the week the Chief Instructor and I sat down and worked out how to run the day effectively giving everyone a chance to use the Glock, Tanfoglio, Revolver, Rifles and Shotguns and hoping to keep the time down to 2 - 2 1/2 hours.

This is basically what we came up with: 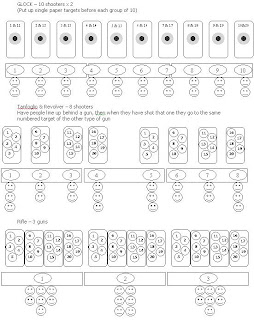 The two club members who helped us last time again offered to assist, which was very gratefully received.

We all arrived at the range about 11.30am and started to set up. Another club member had mentioned a couple of weeks ago that they would like to come for a shoot and they arrived early and helped set up. And a recent graduate of our training program turned up with her teenage son - also again early and assisted with setting up as well.

We managed to set up the tables, the targets and loaded the mags before the visitors turned up. The Chief Instructor welcomed them and gave them a brief safety lecture.

Of the 18 who had booked, only 13 actually arrived. So with the extra two we had 15 shooters and three helpers. Not a bad ratio.

There were a few of the visitors who had shot before but most we complete newbies. However, they all listened well and there were only a few instances of "finger on the trigger" but nobody turned around with the firearms or did anything particularly stupid.

The Glocks and Tanfoglio shooting went well. I was on one of the revolvers and most of the guys who shot them said that they preferred them to the semi-autos. I reckon this had more to do with calibre than anything (the semi-autos were 9mm, the revolvers .357s).

One we had put the pistols / revolvers away we got out the rifles. We only brought three .22lr rifles with us - two bolt action (one left handed) and the single shot. The visitors got to shoot all of them. As the Chief Instructor and other helpers had this pretty much in hand I spent the time sorting out the 9mm brass and counting magazines and generally cleaning up. 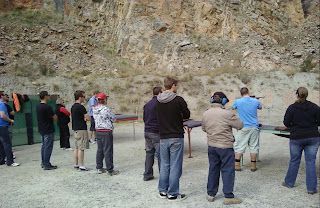 The guys seemed to enjoy shooting the rifles but really brightened up when we brought out the shotguns. We cut open a shotgun cartridge first and explained how it all worked - and, of course, burnt the propellant!

Then they got to shoot. We had only two shotguns this time - unfortunately I hadn't managed to pick up any ammo for my Tuffy, so I didn't bring it. We had 12ga under / over and the 12ga semi-auto.

I think the only way we managed to drag them away from the shotguns was to tell them that the bar manager had agreed to keep the bar open for an extra short period of time.

So we wound up the shooting at about 2.20pm (we started on time at mid-day) and all of the visitors said that they would like to come to the next one. Unfortunately I couldn't join them in the bar as I had lunch that I needed to get to.

We've decided that we'll make a couple of changes for next time - specifically, only use one .22 rifle and a .357 rifle (some of the guys asked about using a more powerful rifle) and by then I'll have bought some ammo for the Tuffy and have that available for them to shoot as well.
Posted by Julie at 8:25 PM

good story julie. it went well all round . i drank your beer for you. and again thanks for all you help. well done with the way you handled the complete novies.
les

It sounds like a good time was had by all.
I still want to get you over here for Blogorado and let you shoot all the fun guns!

Looks great! Teaching that many new shooters and having limited firearms - and more importantly, limited instructors - is a real bear. Congrats!

When can I come to one? I want you to teach me about firearms!

Yep ZC I'ld love the opportunity to show you how to use a gun properly :) Thanks for stopping by!

Sounds like y'all did good! And SAFE too! Now if you can just some volunteers to help CLEAN the guns... :-)

lol Jim we're thinking of running "How to Clean Your (our) Gun" session for club members! To deal with that issue.

Isn't .357 kind of expensive when you could run .38s through those revolvers?