Trying for PSH and failing

Found an article along the lines of "OMG this was in the shops in Australia, how terrible, how terrible". (Article in green, my comments in black). 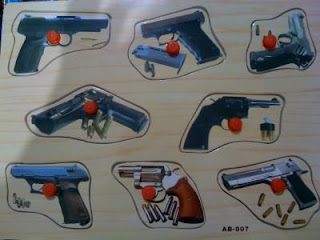 Gobsmacked? Yes, I was when this photo was sent to me last week.

You might automatically assume this wooden toddler toy was on sale in America. You are wrong. It was on sale at a toy stall in Mt Ommaney Shopping Centre in Brisbane last week. A friend and Naughty Corner reader took the photo and sent it to me with one word attached – “What?”

I would have thought the "what?" was easily answered. They're puzzle pieces with pictures of pistols and revolvers on them.

The toy was at hip height alongside puzzles of Australia. Totally accessible to children and treated as an educational toy.

Mmm, yes, I can see why. Teaches children to match shapes to holes. Just like any of these type of puzzles.

In her words: “ I had to do a double-take, as I couldn’t believe a toy manufacturer thought it was appropriate to make a weapon puzzle for little preschool hands. It looks just like his other educational transport and animal puzzles, and I just couldn’t imagine teaching my son –‘That’s a car, that’s a lion, and that’s a Glock’.”

Um, I thought it came with only one word attached? Oh, well, guess they need the counting games too.

“But if they’re making these kinds of “toys,” somebody must be buying them and that’s scary.”

We searched Ebay soon after and found another one of these puzzles for sale for $4 plus $6.50 for shipping.

Item number please, why make everyone who wants one have to search for it themselves? Oh, and how many people did it take to search Ebay for another one of the puzzles? 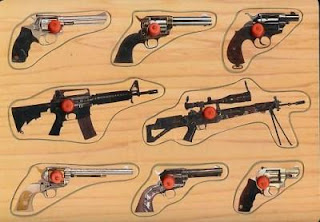 Mmm, interesting choice of guns - revolvers and rifles. I prefer the "all handgun" one myself.

In marketing the puzzle Riverview Gifts write that it is a “great gift for children”.

At least they linked to Riverview Gifts - so if you want one, you can get it from there.

When I contacted Riverview Gifts - to find out where the puzzle was made the told me it was for children aged 3+ and it was “made in China - from non-toxic paint.”

I had to laugh. If I was buying this toy for my child toxic paint would be the least of my worries.

Let me get this right? You believe that a PICTURE of guns is potentially MORE HARMFUL than TOXIC PAINT for your children?!? R.I.G.H.T.

Riverview Gifts failed to respond to questions about whether this was an appropriate gift for three-year-olds.

Um, they've already told you that it was for children aged 3+, so you were asking again because?

The gun puzzles have angered Australia’s Anti-Gun lobby who said the toy was disgraceful economic opportunism and trivialised violence.

IT'S A PICTURE OF A GUN ... nothing to do with VIOLENCE. If it was a picture of a man standing over a women pointing a gun at her head with a big green tick on it, then yes, I might agree with you that it was trivialising or glorifying violence. But seriously we have here pictures of inanimate objects.

“It is an attempt to get children to treat these dangerous objects as playthings,” Gun Control Australia spokesperson John Crook said.

“The danger to the community is that children are inculcated with the idea that a killing device is a normal part of family living.”

And cars, which are used to kill way more people than guns in Australia each year are okay? If the criteria is how many people these are objects have been used to kill then why are we decrying guns? Surely cars / pillows and swimming pools should be banned?

I barely know where to start with this. It makes me so angry.

Why would any toy retailer think this was appropriate? And who is buying this for their children?

Judging from the comments received, most of them would have bought this had it been available when they had young kids. Most of the community is not so totally deluded to thing that a PICTURE of an object is the thing itself AND they realise that it's not the object that causes problems, but the OPERATOR of the object.

Guns are not educational toys for three-year-olds.

I have a big problem with gun play even for older children. Children need to understand that guns kill. And when you are dead, it’s not like in the movies or games - you don’t come back, you don’t get another life.

Cars kills, peanuts kill, pillows kill, dogs kill, trees kill, water kills ... maybe we should wrap our children up in cotton wool and lock them in their rooms (minus the pillows) until they're 21??? And anyway, IT'S NOT THE INANIMATE OBJECT that kills.

But what do you think? Is this puzzle shocking or just good fun?

Given those two choices, I'ld have to vote for fun!

Reading the comments, most of the commentators agree!
Posted by Julie at 4:33 PM

Australian toys For The Win. I just can't believe they didn't include a 1911 on it. Dangit.

Excellent fisking of the screed. And I wish I could find that here in the states for Christmas.

Picture vs. object - great fisk. Adding you to my blogroll, too.

LOL- Sometimes one has to wonder... and yeah, what makes it MORE appropriate cars or wild animals??? sigh...

Panic over a picture puzzle.
Seems someone needs to learn that guns don't kill.
People that misuse guns, do.
Good grief, that idiot is a moron.
But, I repeat myself.

you totally hit it out of the park. Well done!

Oh man, she certainly drank ALL of the 'guns are evil' koolaid didn't she?