The Veggie Garden - One Month On

Back on the 8th of November I posted this picture of the veggie garden: 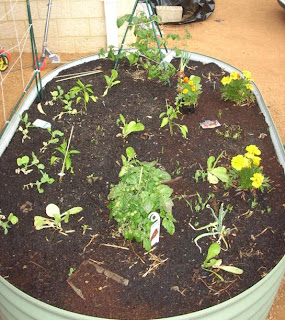 Here's what it looks like today (from the other end - due to the position of the sun): 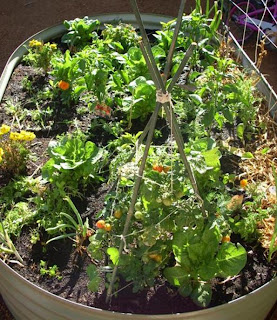 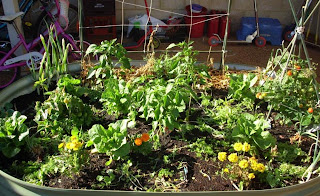 The only issue that we've had is that the side where the snow peas were planted seems to get a lot of radiant heat and the plants just don't grow. I think the inside of the garden bed catches all-day sun and radiates the heat back into the patch. We've now put some straw down that side, but I'm also contemplating putting a roll of newspaper under the straw and keeping it moist to cut down on this. Any other ideas?

We've harvested a lot of the cherry tomatoes (delicious) and the cos lettuce (crunchy and tasty). The straw that we used was chickpea straw and a huge number of pea shoots have sprouted. These taste yummy but there were just too many to cope with and they began to affect the surrounding plants, so I pulled out most of them yesterday but have left a few to grow to see if they'll produce chick peas.
Posted by Julie at 9:30 AM

Asking me for gardening advice is like asking a hooker for a lesson in theology. You might get it, but the odds aren't with you.

I'm a notorious plant killer, although I keep trying to grow things. Wish I could help.

That should work, but watch out for mold under the straw if you water too much and it doesn't get enough air to dry the surface. Looks good though!