Was chatting to GayCynic of Freethinker the other day and he gave me a great recipe for a Spicy Bean and Ham Soup.

Me, being me, changed it a bit based on what I had in the cupboard - 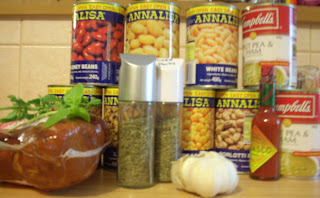 Ingredients
* Two cans of Campbell's condensed Pea and Ham Soup
* 400/440gm cans of the following beans - Red Kidney, White, Butter, Chick peas, Borlotti
* 2x440gm cans of Lentils
* 1kg smoked Ham (thought it was on the bone, turned out it wasn't) - diced
* Oregano (from the garden) - this is a "hot and spicy" type of oregano
* Basil (from the garden)
* 1tsp dried Basil (not enough in garden)
* 1tsp dried Mixed Herbs
* 1/2 tsp Hot Tabasco sauce (never tried this before boy is it HOT and what a stoopid design of bottle, surely a squeeze bottle would work better?!?)
* 2 cloves Garlic
* 1ltr water

I put the whole lot into the slow cooker and it's now slow cooking away. Will update with the verdict (and of course, any process modifications).

Modification 1
An hour into cooking I felt it tasted salty - hubby said it wasn't too bad, but as I had a cooked potato laying around in my fridge, I chopped that up and put it in too!

Modification 2
An hour later I thought it didn't taste spicy enough so stirred in another half teaspoon of the Tabasco.

Modification 3
Miss 7 will only eat hot food if it is pepperoni. Because this had a bit of heat I told her that it had the pepperoni she likes in it. She, after eating a spoonful, told me I didn't put enough pepperoni in. She then got me to slice some into a bowl and serve the soup over the top if it. Miss 9 wanted the same as did hubby. So after doing this I cut up the rest of the stick (500gm total) and put it into the soup as well.

The soup, now being the next day, is yummy (but still a touch salty to me).
Posted by Julie at 9:57 AM