Well We Saw Some Animals This Time At Least ...

Back from another trip to Perenjori (previously blogged about here and here).

My new camera does panarama shots - so here's one of the farm:

This trip was slightly different as my family came along too.

We got to Perenjori on Wednesday evening and set up camp at the Perenjori Caravan Park and had a nice dinner and a couple of beers.

On the Thursday morning we went for a drive out to the farm for a look around. The girls spotted some emus in a paddock.

The wheat crops are looking good. Miss 6 loved the taste of raw wheat. 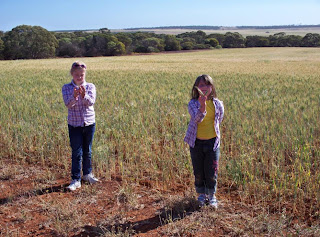 After showing the family around the farm we drove down to the Camel Soak.

I didn't get a photo of the watering hole at the soak, but here's another panarama of the view:

It was a hot day and the flies were everywhere. We had planned a picnic at the Camel Soak but due to the flies (some of which bite), we decided to eat while driving out to the John Forrest Lookout. 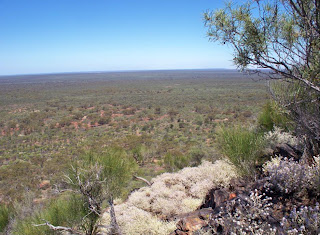 The path up to the top of the lookout was quite steep, so we took an alternative route down (looked like a 4wd track) but it didn't quite go in the right direction so the walk ended up being about double the distance.

After this walk we decided to drive out to Rothsay, which used to be a mining town but in now the "local" ghost town.

The drive was nice and there were LOTS of wildflowers everwhere. 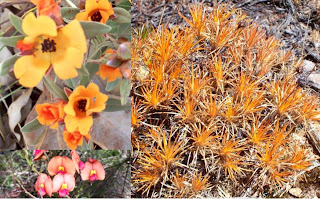 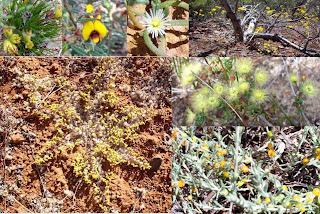 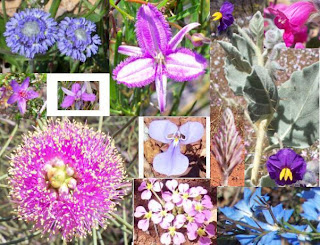 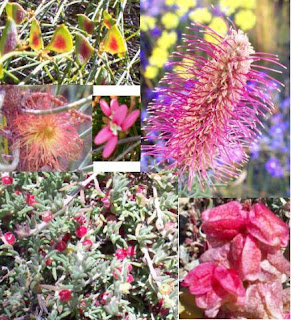 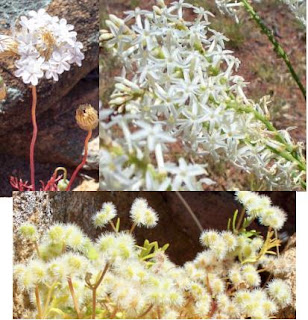 The girls were also interested in the Salt Lakes which dot the area.

There were also a collection of lizards sunning themselves: 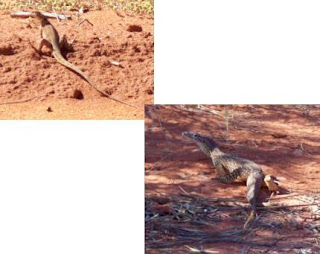 We returned to the campsite to organise a picnic dinner and then headed out to the farm again for some hunting. We drove around in my car for awhile, looking for rabbits (and spotted some roos as well) and then borrowed the farm ute for some "serious" hunting. Miss 8 LOVED being on the back of the ute but Miss 6 preferred to sit inside and chat to the driver (Les).

We saw a few rabbits and a couple of roos. Managed to shoot two rabbits but the girls weren't happy when we showed them how to skin them.

Didn't get back to the campsite until 11.30pm so put the girls to bed, had a port of two (or three, but who's counting) and called it a night.

In the morning Les and I headed out early for a spot more hunting. As we were driving around we saw four fox pups, as well as a couple of roos and some rabbits. I managed to bag a rabbit so bought that back to cook up later.

As it was another hot day and the girls' first visit "up north" we decided to spend the day touring around.

Had an early lunch at Morowa. Drove through to Mingenew and then down to Three Springs. Stopping often to look at wildflowers, termite mounds 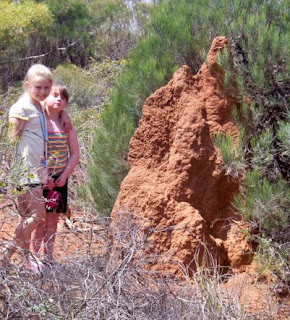 and whatever else took our fancy. It was a fun way to spend a hot day and the girls seemed to really love the scenery.

After a bit of a break in the afternoon we headed back to the farm for a spot more hunting. The ute wasn't available so we just used my car. We headed out first to see if we could see the fox pups and managed to stalk up within 10m of them (with the girls). I was impressed with how they did (especially Miss 6 who isn't known for her ability to keep quiet). Miss 6 saw two of the fox pups but Miss 8 missed them.

We did a bit more driving around and shooting but the girls were really tired (and we were out of fuel - don't ask!) so we headed back at around 8pm to put them to bed.

On Saturday morning Les and I headed out early again for another try. This time I managed to get two billy goats - which I was really pleased about. 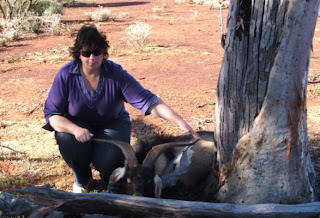 We then headed back to the campsite and packed up.

The trip back to Perth was interesting as we left a very hot, sunny and dry day in Perenjori and hit heavy rain at Bindoon. By the time we got home it was just overcast.

The girls loved the trip and have asked to go again. I think we'll avoid the heat of summer but might see if we can spend a week up there around Easter.
Posted by Julie at 12:04 PM

Man, that brings back a few memories. I lived in that area back in the 1950's. Lived in Bunjil, went to school in Caron and often visited Perenjori, Morawa and Three Springs. Growing up there in those years were good times.

It is a nice part of the world isn't it Morris.