We had planned a second "Have A Go Day" for the month on Sunday.

However, during the week we were contacted by a club member who had two friends interested but they couldn't make the "Have A Go Day" dates, so we said that we would run a special one for them on the Saturday.

We ended up having four people on the Saturday afternoon. All except one had done some shooting before but we started with the basics. As there were only four of them, rather than standing at the table for all of the shooting we actually got them moving with the handguns - which they loved. So much so that two of them have applied to become members of the club. Again the shotgun shooting was one of the most popular activities of the day.

We had 22 people booked for the Sunday, however, only 12 turned up. I wasn't too sorry about this as I was fighting off the flu and brain wasn't really working! Luckily the Chief Instructor was there to keep me in line.

About half a dozen of this group had come to previous "Have A Go Days" but there were also a number of newbies both to our club and to shooting.

We did change a few things from previous days - we split the number of rounds we shot from Glock into two magazines to give them time to have a look how they were shooting and for us to help them more with their grip, stance and aiming.

We also had two bolt action rifles and two lever actions so we could split the group up and not spend so much time on the rifle section. One of the "helpers" also brought his pump action 12ga shotgun for the visitors to shoot and that was very popular (as was my tuffy!).

Here's a picture from the previous weekend showing us helping some of the participants with their grip: 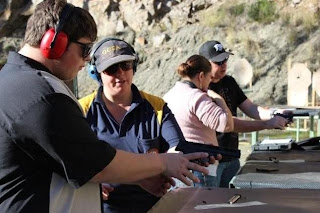 This is great! Have you counted the number of new shooters you've brought into the sport? It seems that more and more people are coming to your classes. Could this point towards a change in the attitude towards firearms in Australia?

Thanks for stopping by DaddyBear. I do believe that there is a change in attitude when it comes to guns in Australia, especially amongst the 20-30y.o. group.

I've not sat down and counted how many people I've introduced to shooting - but I might try and figure it out and let you know.

I stop by all the time, but don't comment that much. You're doing a great job bringing new shooters in and writing here!