And those of you who read Jim's blog, Nobody Asked Me, already know why I was in Sydney.

Yep, I flew across the country to catch up with a Blogger from the US! And it was worth it too. Had a great time. Jim was as lovely and interesting in person as he is in his blog.

One of the things I found unusual in this "meet" was that apart from leaving comments on each others blogs and one or two emails teeing up getting together in Sydney, Jim and I had never really "chatted". So even though I knew quite a bit about his interests, opinions and life I wasn't sure that we'ld get on and would have more than 30mins of conversation topics! Well, I shouldn't have worried. Jim is full of amusing stories (yes, including more about "Blogarado"!!!!!). We have the same sense of humour and Sydney is a great place for "people watching". Jim is truly a delightful dinner companion (and one of the waiters thought so too!).

Apart from catching up with Jim I took the opportunity to meet another Internet "friend" who lives just outside of Sydney.

We've been members of the same forum for about a year but again haven't really chatted much until a couple of days before I headed East. I hadn't actually twigged at that time where she lived. I sent her a message to say I wouldn't be around for a couple of days (and why) only to get one back saying that she's only an hour out of the city.

So she came up on the Friday with plans to stay with me to the Saturday.

We had left plans for the Friday pretty flexible (as there was a couple of other Internet friends that I was hoping to see) and she wasn't exactly sure when she was arriving. But we ended up getting together for a lunch cruise on a Tall Ship on the Harbour. STUNNING!

I have always wanted to do a Tall Ship cruise. A couple of years ago a friend and I had booked to go on one only to have the ship not turn up :( ... (There was some mix up with the bookings and a corporate booking and we missed out). I have been in Sydney a couple of times since but it never worked out. 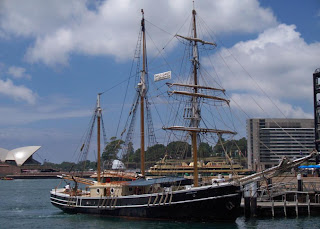 Imagine my surprise / pleasure when I walked past a booth selling tickets for that day's cruise on a "Two for One" basis! If you're ever in Sydney and are looking for a river cruise this by far is my recommendation. The crew were friendly (and quite mad) and the food was excellent.

After the cruise we walked around Darling Harbour for a bit and then found a bar doing a "Happy Hour" (for two hours). We had a great table overlooking the pedestrian area and water and proceeded to sit, chat, drink and people watch. The bar got crowded at one stage and we had two Germans share our table. Hilarious conversation resulted, unfortunately it was only a short chat as they were heading off to catch a plane!

In between the "meets" I did some touristy things. One of the highlights was spending most of a day in the Powerhouse Museum. I have been to the museum before, but with the girls. This time I actually had the chance to look at the exhibits without being interrupted.

I listened to a presentation on the Strasburg Clock that they have there (apparently a Sydney clockmaker decided about 100 years ago to make a replica of the clock at Strasburg). 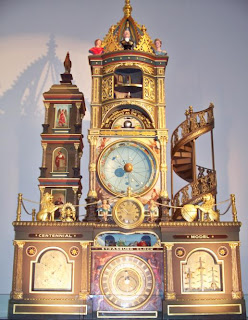 I found the Buller and Watt rotating engine extremely interesting too. It's HUGE. It is a working display, however unfortunately the museum doesn't have a qualified engine driver at the moment to work it. Here's a picture of a model of it: 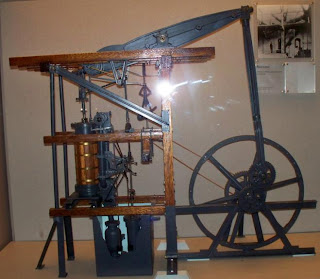 It's a fascinating place and I especially enjoyed their 80's and the astrological exhibits.

I also took a ferry ride out to Watson's Bay. 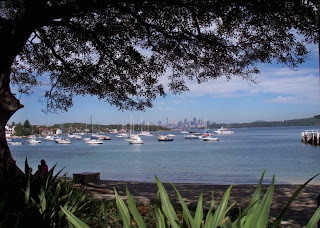 The weather all week was pretty awful (overcast and humid) except for the Friday which was a stunning sunny day. Great day for being out on the water.

There were some other people I had hoped to catch up with but for various reasons - work and sickness mainly - this didn't happen. Just means that I'll have to go back again sooner rather than later!
Posted by Julie at 10:52 AM

Sounds like a good time was had
by all.

Yeah, the waiter was a tad 'strange' to put it mildy... :-) Sorry I missed out on the TS cruise. I came home from your excellent weather to 20s F, and 6 inches of snow... shouldda stayed! Glad you got home safe, and I really enjoyed the time and the people watching too!

Hey great looking blog. Keep it going. Also, check my blog if you have the chance. In order to make money online you need to find the right sites. Well, on my blog I have GPT (get paid to) sites that can make you a good amount of extra cash from home with no cost to you. Follow my link below to get more info.
http://wadeinthemoney-gpt.blogspot.com

You sounded like you had a great time, so jealous I want to go to sydney so I can wander thru the power house museum with out kids.
The cruise would have brilliant as well.

One of these years the Missus and I would love to see Australia. Now we know where to start :-).

thanks guys (and esp you Jim ) ... D.W. well as long as you come to Perth sometime so I can show you around!

What a shame you missed out on the lunch cruise with your friend a couple of years ago. I'm certain he was quite disappointed although still enjoyed your company as always :)