A couple of weeks ago I was thinking about going hunting. I've never been on a hunting trip and I was thinking that it would be something I would like to try.

However, the majority of hunting trips that I have heard about from the guys at the Gun Club were "boys' weekends away" and involved more drinking that actual shooting. I'm not a fan of alcohol and guns together - separately they're okay - so I wasn't sure who to talk to about joining them on their next hunting expedition.

As it happened, I was in the Clubhouse after working with the trainees the Saturday before last and the Training Officer mentioned that he was "heading north to do some shooting". So I asked if he would mind if I tagged along (I know he's pretty strict on keeping guns and alcohol separate too). He said that it would be okay, so last Thursday I headed "up north".

The town is about 370kms north of my place and is mainly a wheat growing area - there's some cattle / sheep around but the farm we shot on was mainly under wheat.

I've not done many long drives recently on my own so I was a bit apprehensive initially (he had gone up a couple of days earlier). However, once I got passed Bindoon it was a fantastic drive - there was a 30km stretch where I didn't see another car in either direction. The weather was overcast and raining and the colours of the pastures and the sky and the occasional bit of sun were just fantastic.

I reached the town in around 4 hours.

I had made final arrangements about the trip with him on a really bad mobile line so we had got as far as "meet you at the pub around lunchtime on Thursday".

I was at the town at 11.30am, the pub didn't open until 4pm :( AND I had sort of assumed that he wouldn't be looking for me until 1pm or so. As it was freezing cold (about 13degC) and pouring with rain I thought I would try and make contact with him rather than just sitting in the car.

It was then I discovered that I didn't have any mobile phone service ... not a problem, there was a public phone across the road ... except that didn't take coins and I don't have a phone card ... ah, again not a real problem as there was a Post Office on the other side of the road ... nope, they don't sell phone cards - nor does the supermarket. Right ... looks like I'm sitting in the car waiting! ... So I bought a puzzle magazine, some yogurt and sat down to wait.

Just after 1pm I spot him walking along the road ... we caught up and went into the house he was staying in for a cuppa.

Over the next three days we went out a couple of times to the farm to shoot. Thursday was just too wet to find anything, but it fined up on Friday and Saturday, so those were better days (still cold and windy but at least no rain).

A view of the main road to the farm on the Thursday: 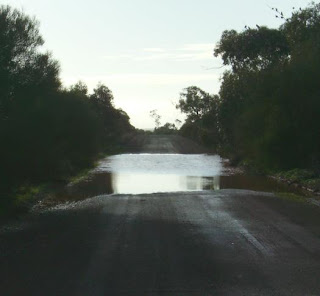 The farm is about 20kms out of town and is owned by the Training Officer' friends. I met most of the family at various times and really got on well with them too.

As I mentioned earlier most of the farm is under wheat and they have a major problem with a variety of vermin - particularly rabbits, foxes and goats. So they were our main targets.

View across the farm on the Friday: 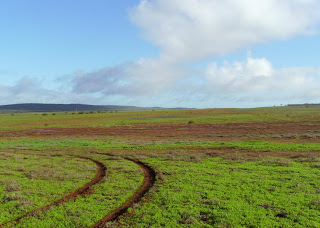 I don't have any rifles on my licence so I was using two of his - a bolt action .22 and a bolt action .22 hornet. I initially started out with the .22 and managed to miss everything I was aiming at, so he set up a paper target and we sighted it in for me. Then we set up a rabbit target at 160m and I hit that pretty consistently with the Hornet - which quickly became my favourite. 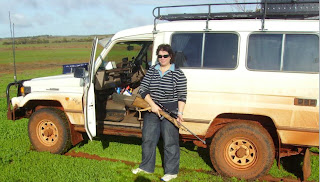 We drove around various parts of the farm spotting the animals and really didn't see many until the Friday evening when we spotted a large Billy Goat on his own. After watching him for a few minutes it was obvious that he was injured, so we got the Hornet out and tried to get close to him. I managed to get a shot off, which connected and he sort of started to run away ... so under the barb wire fence we went to a rocky outcrop to try again. My friend suggested that I lay down to aim, which I did, right onto pickles! ... Anyway, I got a second shot off and into the Goat and he went down. We then went up to him to cleanly kill him. I then handed my friend the rifle while I started to pull the prickles out of my hands, elbows and knees :)

I reloaded the rifle and we drove off in search of more animals – my friend was driving and spotting and I was "shooting". I jumped out of the 4wd a couple of times to go after rabbits (which were always on his side of the track), but didn't get any shots off until after about 45mins. We were at the top of a hill, in a clearing and there were a few rabbits around. I lined up the perfect shot and 'click' ... odd ... checked to see what was wrong and discovered that I had lost the magazine out of the rifle!

We then spent the next half hour retracing the track (it's night remember) looking for the magazine - luckily we found it!

Off we went again and I managed to get two rabbits. My friend showed me how to skin and gut the rabbits. He did the first one and I skinned the second one - decided it was way too cold to stand around gutting it as I wasn't going to keep that one for food.

I also managed to get a shot off at a fox. We think I hit it, but a good search that night and the next day failed to find the carcass.

So after a fun night we headed back to the house.


Saturday was another sunny day and I finally got to see the goats out in the open. The people who own the farm were saying that they thought there were about 200 wild goats on the property. We saw a flock of about 40. I managed to get some shots off but I don't think I hit anything :( They move pretty fast.

I did get another rabbit, which I was hoping to bring back to Perth to cook, but the shot had travelled the length of the body so not good for eating :( We really didn't see much else.

During the day on the Saturday we decided to head about 40kms south and visit a Camel Soak. This is a natural watering hole that was used during the construction of the Rabbit Proof Fence in the 1900s.

At the Camel Soak: 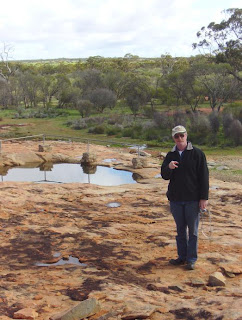 On the Sunday, I said my goodbyes and packed up to head back to Perth. Where I was joining up with my family to head the 400km south to Albany.

The trip back wasn't as easy as the trip up. There were lots of "oversized" vehicles on the road and it ended up taking 5.5hrs to get home.

The Albany trip went well - the main aim was to see my dad - but the absolute highlight (according to my 5y.o.) was the dead baby Humpback whale that had washed up on a local beach. 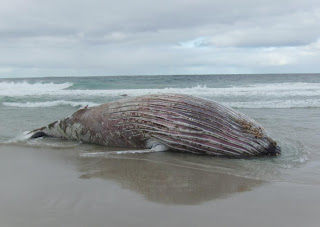 Sounds like a fun trip! And yes, shooting at moving targets DOES take a little bit more practice! The Dingo fence is an interesting story, I've heard bits/pieces of it, sounds like it was a hellva job!