About a year ago my youngest (5 y.o.) asked for a pink toy gun with a holster. I hadn't been able to find one and I was also in two minds about the wisdom of giving toy guns to kids.

I know lots of people who had toy guns as kids and have turned out to be responsible adults - some gun owing, some not. But I also didn't want the girls to think guns were something they could play with.

Today in the shops my eldest (7 y.o.) spotted some pink toy guns, with holster, belt, pretend bullets, pretend lasso, sunglasses and a sheriff's badge and asked me if we could buy it. Which we did.

After picking up my youngest from a play date we came home and I got their toy guns out and my 9mm and put it on a table to have a chat to them about things.

I asked the girls what the difference between the guns were. The eldest said - "That one is real, this one is pretend" and the youngest agreed. I then asked them what the rules were for using the real gun. My youngest replied "you have to hold it safely". When I asked what "holding it safely meant", I was told that you didn't point it at people (or the T.V.) and that you don't put your finger on the trigger.

I then asked them if the same rules applied to the toy gun. My youngest said "No, it isn't real".

I then asked them what they do if they found a gun - real or pretend - they said, "Leave it alone and tell an adult."

I thought, "Fair enough, they do understand the difference and they know how to behave with a real one" so now they're off playing with their toy guns. 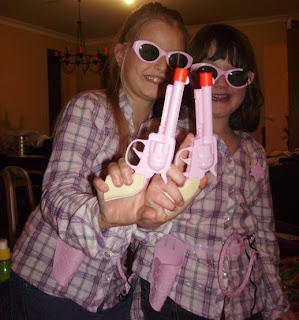 PS. Just overheard the girls playing. The youngest said "I'm working there to shoot animals for the people to eat as they don't have any food."

PPS. The eldest is now drawing a picture to show the youngest where she needs to hit on a "bunny rabbit" to kill it.
Posted by Julie at 4:13 PM

Julie the Girls look Beautifull ..love their Pink Guns and you have taught them well .. they understand what a real gun is and how to handle one ...

You are doing a great job. I am still hesitant about buying my little boys toy guns. Half of me believes what they play with in childhood will have an effect on how they handle certain things in adulthood. But on the other hand, I know that even if you don't give your kids toy guns, if they turn out psychotic when they are grownups, there's still no stopping them from playing with guns and killing people. Oh well. I just decided to be safe.

Toy gun is very popular toy for children. Most of them like this very much. They always like to play with it. I have a wab site. Anybody can find deferent kind of toy gun here. Everybody welcome to my Toy guns for sale site.