My friend fitted the new recoil spring for me (and firing pin spring) (yes, I can do it, but I was doing something else at the time). He didn't fit the mag well due to time constraints.

Anyway went up the range, I decided not to shoot with the regular squads but just give the gun a workout to see how it goes.

My friend fired first and the first round failed to eject. But from then on the gun worked perfectly. For both him and me. I used my reloaded rounds and the Chip McCormick mags and everything just came together. 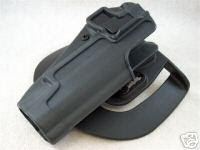 I also need to work on my draws to ensure that I get the gun correctly into my hand each and every time. I have a Blackhawk Serpa holster with a "release" lever which helps with the draw but sometimes I get the beaver tail just off centre.

There is so much to remember and work on with IPSC style shooting - I'm hoping some of it becomes automatic soon :)

If all goes smoothly I will go back to the range tomorrow and actually shoot the stages - will have to do some reloading tonight.
Posted by Julie at 4:41 PM