Things to Remember Next Time I Need to "Bring a Plate"

"Bringing a Plate" means that you need to turn up at whatever function with some finger-food for others to eat ... these will certainly stand out: 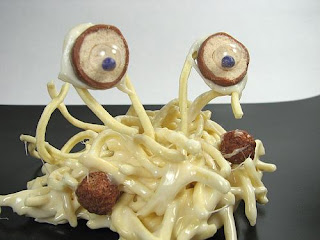 instructions from http://evilmadscientist.com/article.php/edibleeyes
(i've copied and pasted it without photos as i don't really think they're necessary - refer to the original site if you want to see the piccies).

To begin with, we need a food-grade rigid transparent dome that will form the outer visual shell of the googly eyes. Empty gelatin capsules like these slide apart easily and come with one such dome on each end.

You can get capsules like these in bulk at all kinds of "natural" and "health food" stores-- or even at many grocery stores in the section where dietary supplements are sold. There is of course a huge selection online-- you can even get them in different colors and flavors. Capsules come in range of sizes; we suggest starting with size 00 or so to get a good dome.

While the gelatin capsules have a dome on each end, they have a lot of space in between that we really don't need. The photo above illustrates how much of each end we want to keep: the domed part plus a few millimeters. As it turns out, you cannot use the scissors to actually cut it there-- it will crack or suffer permanent creases, making it useless for our application.

Instead, using fine-point scissors, make one continuous cut from the opening to remove the excess capsule material. This actually works very well and does not cause undue stress to the dome that we want to keep.

Next, we're going to need rolling pupils for our eyes, and these fit the bill perfectly. These are Wilton Jumbo Rainbow Nonpareils, one brand of *giant* round sprinkles a couple of millimeters across. Our big surprise: these actually taste pretty good-- they're flavored candy. The downside is that we only really want dark pupils, so there's some fishing around to find them in the assortment..

Suggested substitutes: other brands of round sprinkles and cake decors, as well as Nerds candy (look for the occasional round pieces). While you might be tempted to try using flat "confetti" sprinkles or similar types, we actually found them to be quite unsuitable-- they get stuck in all kinds of unexpected ways instead of rolling freely.

Next we need a solid substrate that serves as the back surface of the googly eyes-- the whites of the eyes. The substrate needs to be sturdy, so that it can support the rest of the eyes, light in color, and completely dry and free of oil. At the same time, it needs to be soft enough that we can press the gelatin capsules into it.

Our substrate of choice is (are?) Whoppers, although some other things will work as well. To use the Whoppers, first cut them in half with a chef's knife. Then, using a (virginal) half-capsule as a tool, press an indentation into the semirigid center of the Whopper.

Place one of the round "pupil" sprinkles in the cut-off capsule dome, and press it into the indentation made in the Whopper hemisphere. Press it in deeply enough-- several millimeters-- that it will not fall out, but not so deeply that it restricts the motion of the sprinkle pupil. Some care is required-- the substrate can shatter if you push too hard. Special worry about using this particular substrate: the outer, chocolate-like coating will begin to melt if you handle it too long.

Once the capsule dome and pupil are in place, test your new googly eyes, and make sure that the ball rolls freely in the dome. That's it! You've made edible googly eyes!

The basic idea is that we make rice krispy treats, omitting the rice crispies and instead using some tasty dried noodles. Now, rice krispy treats without the rice is actually just marshmallows and butter-- an effective and edible glue that can be used for all kinds of purposes.

You can crib the butter/marshmallow proportions from the original source or from whatever box is handy-- no two of these seem to be exactly the same. Anyway, melt a bunch of marshmallows with a little butter to make the glue. To that, add some small pieces of precooked dry noodles. Spoon the resulting mess out onto parchment paper, and decorate as needed.

The "classic" choice for this sort of thing is to use chow mein noodles-- already used to make a few different kinds of no-bake cookies. Of course, considering our theme, it makes sense to instead use ramen noodles. Ramen noodles have beens successfully employed with sweets lately, and it seems like a fine idea. (Remember to omit the flavor packet.) We used another type of dry asian noodle, beautifully labeled "Excellent Flour Stick," for ours.

Mounting the googly eyes to the eyestalks presents a bit of a challenge, since the "rice krispy" glue does not set immediately, and the eyes kept falling down. Instead, dip the eyestalks in the glue and place them flat on a piece of parchment paper. Then, set the eyes flat on the eyestocks to cool and bond. Later these eyestalk can be added easily to the top of the noodly blobs.

The crowning detail of course is to add the meatballs-- in this case Cocoa Puffs. And we're done-- one hundred percent edible Flying Spaghetti Monster treats with working googly eyes.
Posted by Julie at 7:33 PM